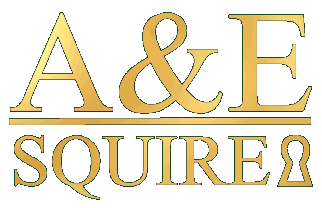 The Squire family have been making locks in Willenhall for over 300 years, but it was not until March 1927 that A & E Squire Ltd was originally founded as a partnership by two brothers, Alzo & Elroy Squire.

They began part-time working in a brick outbuilding at the back of their parent’s house at 1 Little Lane, Short Heath, Willenhall, Staffordshire. Like many of their neighbours the brothers were outworkers, working in the early morning and in the evening when they had finished working in the lock factories of Willenhall.

Elroy, who was the younger of the two brothers, worked at Hargrave & Fox, Willenhall, where he became one of their best locksmiths. When he was 20 he asked for a rise as befitted his ability. However when this was not forthcoming Elroy decided to leave and start his own business.

Whilst running his business, and being less than 21 years old, he was unable by law to sign cheques in his own right, therefore his father (Arthur Squire) signed on his behalf. When Elroy became 21 he told his father he would sign himself but Arthur insisted he would still sign. This continued until one day Charles Pinson of Josiah Parkes asked Elroy "Who’s the gaffer at your place, it’s him who signs the cheques is the gaffer?"

At this time Elroy asked Alzo to join him in the business. To this end they obtained a mandate from the Bank, which they signed and in effect took complete control of the business from their father. A short time later Arthur asked why he hadn’t had any cheques to sign lately?

This was the beginning of A & E Squire.

At first Alzo continued to work as a foreman at Vaughan Bros in Willenhall in order to bring in a steady wage until their business was on a firm footing. He enjoyed going to sales where he purchased various items for tooling their workshop. These he then donated as his contribution to the assets of the partnership.

Their father, Arthur, who was working as foreman in the lock shop at Thomas Tuckleys, Willenhall, was dismissed when it became known that his sons had started a business in opposition to them. Following this he was employed full time by A & E Squire.

As time went on and space became a premium the brothers bought their neighbours workshops and covered yards to create more space for more machines and employees. Eventually most of the surrounding houses and buildings in Little Lane and Bloxwich Road North were acquired and bigger and newer shops were built.

In the early days, Alzo and Elroy’s mother Sarah and their wives to be, Barbara and Olive, helped to wrap the locks and pack them into boxes on a Friday evening ready for Elroy to deliver to Willenhall on the back of his bike. Elroy insisted on being paid in cash there and then so that when he returned back to work he would be able to pay the waiting employees their wages.

During the Second World War A & E Squire worked for the Government making ammunition cases. The business was incorporated into a Limited company in 1960. We are still on the same site today as we were in 1927 and the original workshop at the rear of 1, Little Lane is still in use as part of the finishing department. The house was demolished many years ago and we no longer have an entrance in Little Lane.

Throughout the years many of the Squire family have worked in the family business. As well as the parents and wives of the founders already mentioned their brother Lionel and sister Iris, children and grandchildren have all been employed at the company.

Elroy’s son Derek and Alzo’s son Keith joined the firm in 1951 & 1953 and now the firm is managed by the third successive generation of the family. Alzo died in 1974 and Elroy died in 1980 leaving Derek and Keith to continue their good work .In more recent times Derek’s children have sustained the tradition of joining the family business (Diane 1976, Martin 1977 and Craig 1986). Unfortunately Managing Director Derek died in 1996 leaving the following members of the family running the business: